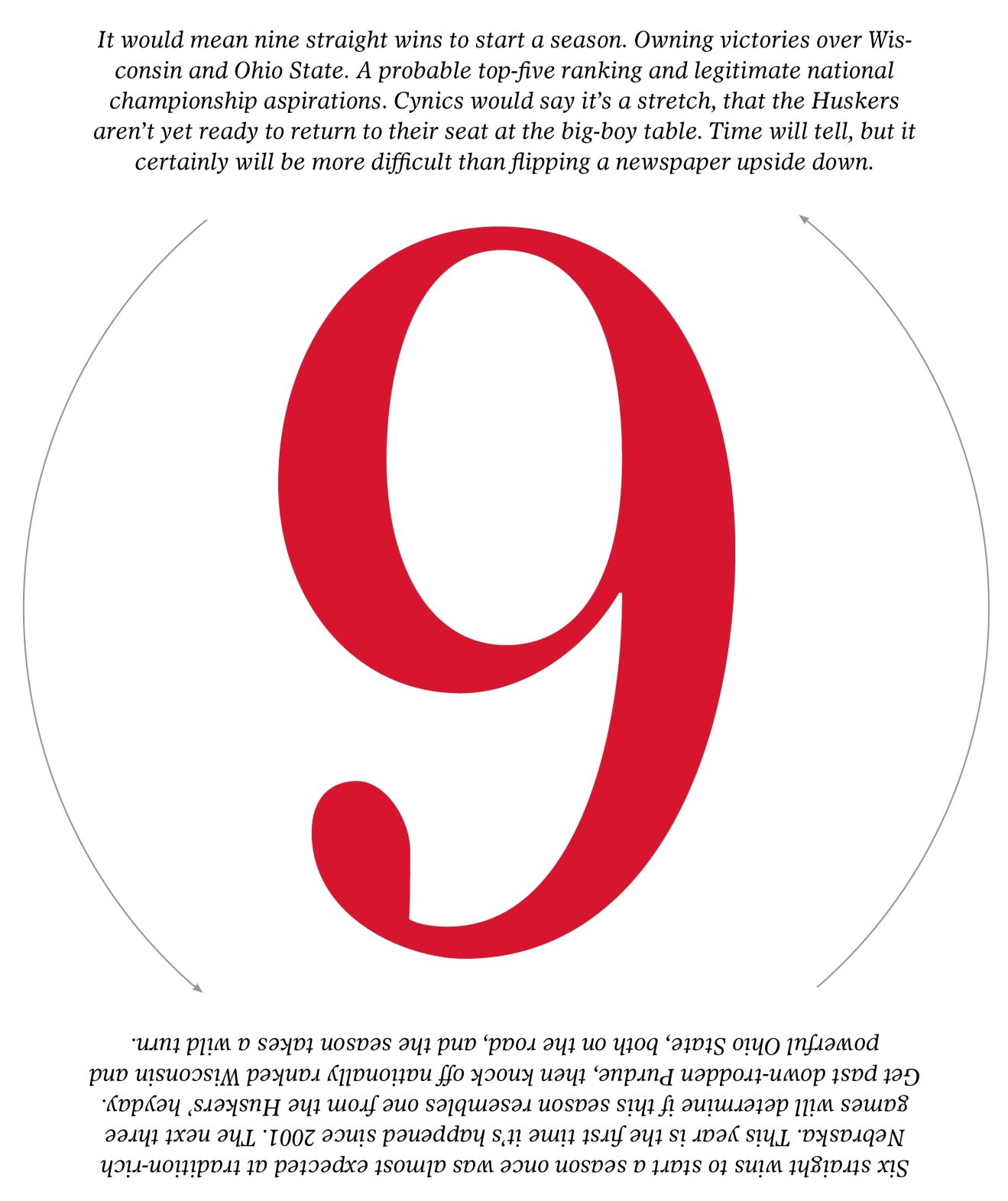 The Huskers' improved commitment to the run game has paid off this season in the fourth quarters of games, as NU has closed out wins against Northwestern, Illinois and Indiana with a glut of runs from Terrell Newby. Purdue's run defense has been awful in Big Ten play, giving up 400 yards to Maryland, 315 to Illinois and 365 to Iowa. Aside from defensive tackle Jake Replogle — a nice player — the Boilermakers haven't shown much ability to compete. Last season's game against Nebraska is an exception, when the Huskers managed a measly 77 yards. Nebraska avoids a repeat of that mess.

The Boilermakers will almost certainly load up the box to stop Nebraska's run game, forcing Husker quarterback Tommy Armstrong to throw the ball. Purdue defensive coordinator Ross Els — a Lincoln native and former Nebraska linebackers coach — must know that Armstrong struggles against stingy man-to-man defense. Els will likely roll the dice, play physical against Nebraska's wideouts and see what Armstrong can get done. A better screen game would be helpful.

The Huskers played stingy run defense against Indiana, giving up a paltry 88 yards on the ground — 33 of which came on one play. Purdue's run game has been pretty average this season — Maryland held the Boilermakers' to 10 rush yards, while Iowa allowed just 46. The Boilermakers will happily abandon the run to throw, and that will likely happen Saturday.

Purdue quarterback David Blough is the prototypical Texas high school gunslinger. He can run around and make big plays, he'll take big risks and he's tough to knock down or discourage. He riddled the Huskers last season for 273 passing yards and 82 rushing yards. His experienced set of receivers — led by DeAngelo Yancey — will give Nebraska some fits. The Husker secondary could give Blough some fits, though, with its tight coverage and playmaking ability. Chances are, they'll both take chunks out of each other.

Nebraska's punt team is the nation's worst and Purdue will have to try to take advantage of it with either a return or a block attempt. The rest of Nebraska's special teams are decent enough, if not spectacular; it feels like De'Mornay Pierson-El is close to breaking a long punt return for a touchdown. Nebraska has the better kicker in Drew Brown, the better kick coverage unit and should squeak by Purdue in this category.

Purdue has the Big Ten's worst turnover margin (minus-7 for the season) but commits fewer penalties, for fewer yards, than the Huskers. The Boilermakers are awful in the red zone, converting just 14 of 22 trips into points, while Nebraska's defense is the most stingy. NU has to guard against looking past Purdue to big games against Wisconsin and Ohio State, but since Purdue beat NU last season, there's some decent motivation here.

If Nebraska runs the ball well, it's game over. The question is: Will the Huskers' beat-up offensive line be any better than the average players Purdue puts on the field? NU needs to stick with the run even when it doesn't appear to be working because the Huskers have proven it'll pay off in the fourth quarter. Improving Nebraska's first-down yards per carry would be good, too.

Has there been a recent game Nebraska more wanted to merely survive — without any more injuries or, of course, a loss — than Saturday's game against Purdue? The Boilermakers have an interim coach, Gerad Parker, after they fired Darrell Hazell. So the team has little to lose, and knows it'll have an entirely different coaching staff by next season. There's a freedom in that. They'll play for themselves. Nebraska, meanwhile, can put this game on ice quickly with a big first quarter, but it's not too likely. This game might just be a pain to watch. NU's defense should hold up OK, but the offense may struggle, and this game could be closer than expected. If it is, expect a week of hand-wringing from Husker fans.

Check out a PDF of the game notes for the Nebraska-Purdue matchup provided by the Husker Athletic Department. Click here »

Find information on every win, loss and tie in Husker history. With historical World-Herald front pages, photos, stories, key stats and more, our ever-growing Husker History Database is your new home for archiving one of the nation's most tradition-rich programs. Click here »

Check out the Big Red Today page on Facebook to discuss the latest news with the top Husker fans, and follow us on Twitter to get instant updates and analysis whenever news breaks. Plus, look back at historical moments in Nebraska football by following @HuskerHistory on Twitter.

IPhone and Android users, get your Husker updates on the go by downloading our free Big Red Today app from the App Store and the Google Play store. Omaha.com/BRTapp and Omaha.com/android

Sign up for the Big Red Today email newsletter to get the Husker news, analysis, daily headlines and more delivered to your inbox. Click here »

In 1891, the Huskers and Hawkeyes played 'for blood' on Thanksgiving

Some fans say Iowa and Nebraska aren't rivals. Others concede they are. But nobody took the game as seriously as the 1891 Omaha World-Herald sports department.

All of Nebraska's history vs. Purdue football is recent. Except one 1958 game

Nebraska and Purdue faced off as conference opponents for the first time in 2013, which ignited what will be at least 13 consecutive seasons with one another on the schedule. But 2013 wasn't the first overall matchup. Nope, that came…

Monday rewind: Nebraska football needs a spark — and maybe a little time 'away from each other'

We wrote this story out of Minnesota in 2013 and 2017, too. The names change. The clichés, too, a little bit. And even if it’s supposed to be different under Scott Frost — even if, one day, it is —…

Stopping the run is crucial in the Big Ten West, and Husker football ranks as the worst

Time and again, opposing coaches see Nebraska step off the bus and wonder if they can run the ball on them. And then they do.

'Keep it going or pack it up': Scott Frost delivers frank message to Huskers after Minnesota loss

Scott Frost had one hand in his pocket, and the other one was carrying a playsheet. And nothing was fine for the Nebraska football coach.

P.J. Fleck just shoved his oar right down Nebraska’s throat. People like to laugh at Fleck, the Minnesota football coach, saying he’s a huckster and a fake. Well, there was nothing fake about what Fleck’s Gophers did to Nebraska on…

The blank faces said it all. By the time Nebraska defenders trudged off the cold and misty field at TCF Bank Stadium, they had already processed much of the carnage. A 20-point third quarter that blew the doors off a…

Losing numbers: The stats and figures that defined Nebraska's loss to Minnesota

A closer look at the defining stats and figures from the Huskers' loss to Minnesota on Saturday.

Minnesota carved up Nebraska’s defense with its run game Saturday night because it spotted soft spots disguised as strengths.

Nebraska-Minnesota: Breaking down the Huskers' performance on offense and defense

World-Herald staff writer Chris Heady takes a look at Nebraska's effort on both sides of the ball during the Huskers' loss to Minnesota.

Nebraska quarterback Adrian Martinez is not suited up for the game an hour ahead of kickoff and will not play against Minnesota.

Some regents say it’s a win for Nebraska to bring Hank Bounds back because he is a good fundraiser who knows and cares about the projects involved. Some observers say they are perplexed by the amount he will receive, and…

They both have young offenses, but Minnesota can show Nebraska how fast they grow up

The Huskers think a strong second half is coming. Their counterparts in Minneapolis have already experienced it.

Noah Vedral knows the offense back and forward. We haven’t seen a lot of his game. He got in one game last year. And then last week. That’s the beauty of it, too. There isn’t a lot of film of…

Fremont senior Keegan Menning added his name to the list of walk-ons in Nebraska’s 2020 class on Thursday night.

“It’s an awesome rule,” said Luke McCaffrey, who’s drawn raves from coaches and teammates while he redshirts and works to push Adrian Martinez for the starting role next season. “I think it’s fantastic.”

Mohamed Barry was named a quarterfinalist for the 2019 Lott Trophy, which recognizes a player who made the biggest impact on his team both on and off the field.

While Nebraska's travel roster is rounding into form, the status of players at multiple key positions remains unclear.

"I just thought that I was on a different planet almost," she told The World-Herald. "It was a special place to be."

Husker opponent preview: Everything you need to know about the Minnesota Gophers

“Defensively, they’re a lot more sound than what we saw last year and more athletic," Scott Frost said. "They’ve definitely improved. You can tell it’s year three of his tenure up there. They’re starting to look like the team he…

Weather, smeather. That was more or less the reaction from Nebraska offensive coaches Tuesday when probed about how they might adjust preparations for Saturday night's game at Minnesota that calls for temperatures in the mid-30s and a good chance of…

Encouraging news this morning from Husker football practice. Adrian Martinez (knee) and JD Spielman (undisclosed) were both in pads for practice Wednesday.

Earlier this week, I called Matt Turman to talk about his nephew, Noah Vedral, waiting and getting that big moment. But as we talked, it hit me that there's a bigger story. The story about the small, small world of…

For Nebraska’s program to be full blast again, the A.D. says it will take two more recruiting classes and two more years of developing a walk-on program.

Minnesota once told the Huskers they were 'no good.' Nebraska responded with 84 points

Nebraska has dominated Minnesota since 1963, claiming 19 of 22 games. But the Gophers have the all-time edge.

'Just gotta stay locked in': Husker defensive backs will be tested by trio of Minnesota receivers

Inside linebacker Mohamed Barry doesn’t usually concern himself much with wide receivers. This week, he’s at full attention.

McKewon: Ronald Delancy brings more flavor from Miami, where they play defense with an edge

Nebraska received a commitment Tuesday from Miami Northwestern defensive back Ronald Delancy. Three takes on the decision of the 6-foot, 165-pounder.