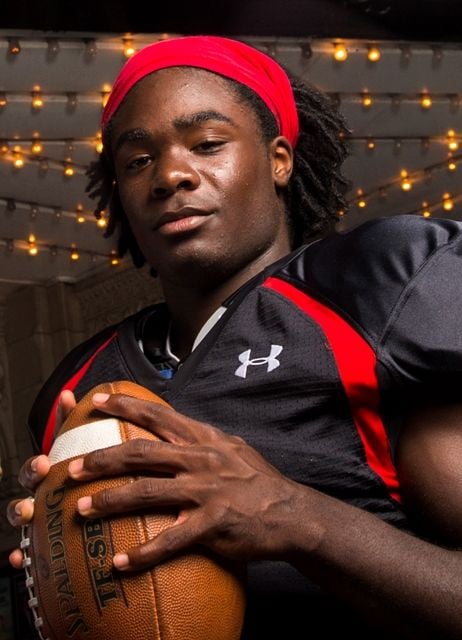 Where is the Class of 2016 from? Hover over a state in the map below to see how many commits NU has signed from each state.

You need to upgrade your Flash Player

Mike Riley and his staff spent the morning biding their time. They watched the faxes come in, did various interviews on the Huskers' own signing day program, on BTN and on ESPNU, and made sure the Twitterverse stayed quenched with updates. And just before 1 p.m. Wednesday, the final letter of intent — belonging to New Orleans linebacker Pernell Jefferson — popped out of the fax machine, and Nebraska's 2016 class was complete. And it's a class that, according to Riley, has some serious talent.

The Huskers signed 21 players Wednesday and announced a nine-person walk-on class, too.

While it lacked some final-day drama, there was no shortage of uncertainty. Quayshon Alexander seemed to be wavering as of signing day eve, then ended the speculation with his early morning commitment to NU. Now he's ready for his "new future." On Tuesday, NU was trying to convince recent Stanford decommit Beau Bisharat to sign, but the running back picked Colorado late Tuesday night. Then, on Wednesday afternoon, New Orleans linebacker Pernell Jefferson had some doubting his commitment. But 3 hours and 14 minutes after the 20th letter of intent came in, Jefferson filed his at 12:38 p.m., becoming the 21st and final piece of Riley's first full recruiting class.

As far as winning or losing the day, Nebraska seems to have finished hovering right around the top 25 in the recruiting class rankings, the highest since 2013. And that's without signing a recruit from Texas — the first time in 33 years that's happened at Nebraska.

And though the drama may have been somewhat limited, there was no shortage of news Wednesday. You can see a full list below, but the highlights are worth mentioning:

» As far as signing ceremonies go, Greg Simmons was hard to beat. His father gave an emotional, must-see speech during his signing day ceremony. Of course, the snow tried to keep Nebraskans from their signing ceremonies, but Ashland-Greenwood's Ben Stille couldn't be stopped. And it's hard not to wonder if Marquel Dismuke's signing day ceremony will be the first of many at Calabasas High.

» Of course, our reporters dug into the data for you, bringing some good stories to light. Sam McKewon offered his five sleepers in the class, and also ranked the Big Ten's new crop of QBs. We've got a look at NU's recruiting budget over the years. And of course, we've dug up some of the best signing day stories from our archives.

There is a ton more below. Tell us who you think will be the Instant Impact and Hidden Gem players from the class. Click on the player cards at left to see biographical information for each and every commit — including star ratings, photos, Hudl highlight videos and more — check out the class page for a closer look at the walk-ons, transfers and more, and check out the latest videos below and make sure you're following Big Red Today on Twitter and Facebook so you don't miss out on any news.

And finally, check out the following links, which take you to our live signing day interviews with nearly half of the recruiting class. They were generous with their time, and they gave some good interviews. Thanks for following along, and stay tuned for even more in-depth NU and Big Ten recruiting news.

TBL: Dirk Chatelain and the history of recruiting